ApneuVereniging Vlaanderen, Apn(o)ea Association Flanders, is the Patient Organisation for sleep apn(o)ea patients in the Dutch speaking part in Belgium (Flanders and Brussels), founded on May 12, 1997.

Belgium has 11,4 million habitants with 3 offical languages and 3 regions. About 60% is Dutch speaking and 40% is French speaking (German is spoken by only 0,7%). Flanders is the northern region, boarding to the Netherlands, Walloon is the southern region, boarding to France. Brussels at the center of the country is the third (metropolitan) region, officially bi-language, in reality multi-language with French as dominant language.

Most apn(o)ea patients are treated with CPAP, about 110.000 at the end of 2017, or 1% of the population.
We are trying to get the numbers of the other treatments (MRA, surgery, hypoglossal nerve stimulation, positional therapy,...)

Treatment is covered by the sleep apn(o)ea convention between hospitals and the public NIHDI National Institute for Health and Disability Insurance (RIZIV in Dutch, INAMI in French).
There are 67 recognized sleep centers at hospitals, ranging from 300 to 5000 patients. 32 in Flanders, 9 in Brussels.

The sleep center is paid per patient 2.82€/day during the first 6 months of the treatment and 1.79€/day afterwards. On an annual base: 841€ the first year, 653€ the following years.
The patient contributes 0,25€/day to this allowance (none if low income, beneath 17 855€/year in 2016) or 91€/year.
Therapy compliance has to be checked yearly (minimum average 4h/night) and patients are accepted with AHI=15 or higher.

ApneuVereniging Vlaanderen was created in 1997 originally as VAPA (Association of Apn(o)ea Patients Antwerp) at the University Hospital in Antwerp and organised in the first 20 years bi-annual meetings at this hospital.

With the name change and a new president, the new board set as objective to reach all dutch speaking sleep apnoea patients. The quarterly magazine of the colleagues of The Netherlands is now included in the yearly contribution. In about 10 sleep centers patient meetings are planned.

There is no subsidy from the government (nor the federal in Belgium, nor the regional in Flanders).
Commercial companies sponsor via web advertisements or events. 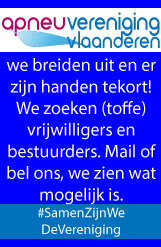 Wat we organiseren of waar we aanwezig zijn...